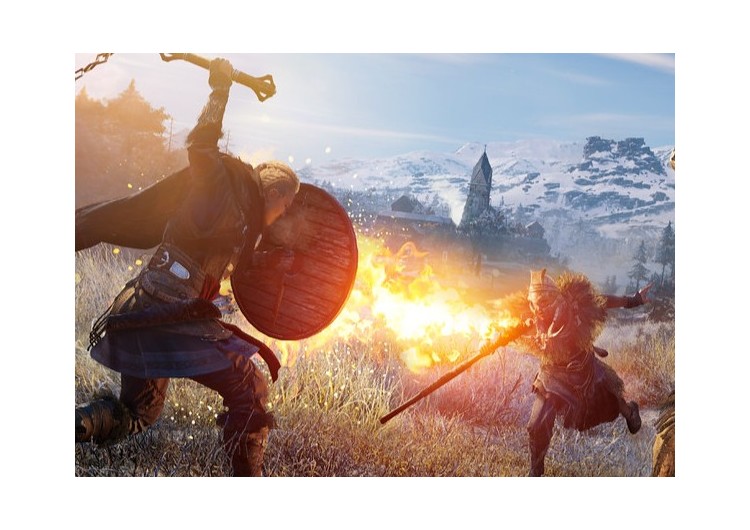 
We've been on wiki again.. Assassin's Creed Valhalla has been in development for more than three years. The main development was led by the Assassin's Creed Origins team at Ubisoft Montreal and supported by fourteen other Ubisoft studios worldwide. While the tail-end of the game's development fell during the COVID-19 pandemic, the bulk of the Ubisoft staff assigned to the game was able to work from home with the support of Ubisoft's information technology departments, assuring the game was ready for release in 2020. The game's narrative director was Darby McDevitt, who was the lead writer for Assassin's Creed: Revelations and Black Flag and co-writer of Assassin's Creed Unity. USGamer's Mike Williams described the large scope and effort behind Assassin's Creed Valhalla as the equivalent of the series' "grand unifying theory" to combine all the past design and development work into a single vision without necessarily reinventing any of the previously developed concepts. McDevitt explained that Valhalla's story was written as a recap of all the prior Assassin's Creed games, connecting them in non-trivial fashions, but not intended to be the final game in the series. He also stated that his experimental structure to the narrative was "quite unique for any game" he had seen as well as for the Assassin's Creed series itself.


IGN noted that the main story campaign—not including downloadable content—lasted for roughly forty hours, but that completing every side quest and location could extend that to over one hundred hours.


The plot: In AD 873, war and overcrowding in Norway prompts Eivor and their brother Sigurd to lead their clan of Vikings to settle new lands in Anglo-Saxon England, as part of the Viking expansion across Europe. The clan comes into conflict with the kingdoms of Wessex, Northumbria, East Anglia, and Mercia over the next several years, as well as the warring sons of the legendary Viking warrior Ragnar Lothbrok, who made up the Great Heathen Army. Eivor's clan will face forces led by the leaders of these kingdoms, including Alfred the Great, the king of Wessex. It is during this time that Eivor meets the Hidden Ones and joins their fight against the Order of the Ancients. Explorable cities include Winchester, London, and York. Parts of Norway will also be included.


What's New? Valhalla will have a similar structure of main story missions and a number of optional side missions. While the main storyline in past Assassin's Creed games typically moved linearly through the main sections of the game world, Valhalla has the player often returning back to the main settlement and back to areas previously visited as information about the new areas of England are learned by the Vikings through reconnaissance or from contacts. Not all missions require violent ends, with some that can be resolved through diplomatic means.

The game will see the return of settlements, which have been absent from the series since Assassin's Creed IV: Black Flag. However, where these settlements offered the player passive gameplay bonuses, settlements in Valhalla will take on a renewed importance. The player will be able to direct construction of certain types of buildings, which in turn provide benefits for gameplay. To build these structures, the player will need to lead the Vikings on raids to collect resources.  Conquest Battles, a feature introduced to the series in Odyssey, will return. From what we can tell there isn't anything hugely revolutionary with Valhalla, They have taking bits that worked well in previous games and made them better (or worse, time will tell).

Reviews have been overwhelmingly positive. Some calling it the best AC game to date. Others have said the game is more buggy than it should be and has limited stealth mechanics and a disconnected story. Everyone agrees the game is beautiful though.